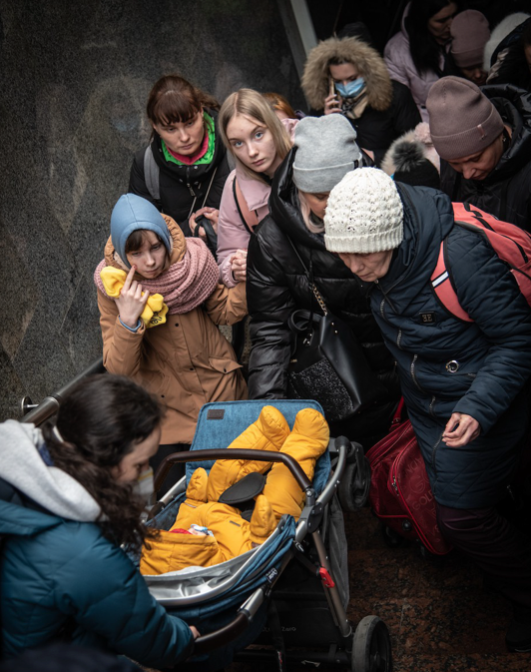 "The Ukrainians neither wanted nor expected this war. The way they dealt with it is extraordinary and at the same time embodies the universal story of a nation's struggle against the turmoil imposed on it. " - Justyna Mielnikiewicz

Since 2004, Justyna Mielnikiewicz, a Polish photographer, has been documenting Ukraine, which makes her work a unique long-term project on the country. In February 2022, she returned to Ukraine to continue her project and it was there, in Dnipro, that she was surprised by the Russian invasion and the war that broke out on Thursday February 24. Faced with this event, she decided to continue her work there and to document the first 3 weeks of the war, among others in Lviv, Kyiv and Dnipro.
In front of the lens of Justyna Mielnikiewicz, ordinary people, Ukrainian men and women live in the shadow of war. She captures their daily life, reveals to the world the reality of a life at war, by painting the portrait of a united people in resistance. Justyna Mielnikiewicz's gaze is both tender and vigilant, because it is also the gaze of an expert on Ukraine, its geography and its history, its ethnic, cultural, religious and linguistic diversity. Her photographs show the Ukrainian reality in all its complexity and its paradoxes, far removed from propaganda or simplistic generalities.
The work of Justyna Mielnikiewicz is part of the long tradition of war photographers, witnesses and relays of violent news where the truth is often sacrificed in another war: that of image and communication.
Since February, Russia has been waging a deadly war both on the front and on words. Thus, disinformation calibrated to cast doubt on the existence of an independent Ukraine on the map of Europe floods communication networks and discourse. The testimony of Justyna Mielnikiewicz, at the height of women and men, stands as a rampart for the truth.

Justyna Mielnikiewicz has lived in Tbilisi, Georgia since 2003. Her work has been published worldwide by The New York Times, Newsweek, Le Monde, Stern and National Geographic, among others. She has been a recipient of World Press Photo, Canon Female Photojournalist Fellowship, Magnum Foundation Caucasus Young Photographer Award, Aftermath Project Grant and Eugene Smith Fund. Most of her work is devoted to long-term personal projects, published as books: Woman with a Monkey- Caucasus in Short Notes and Photographs (2014), Ukraine Runs Through it (2019). The latter was shortlisted among the 20 best books by Paris Photo and Aperture. Justyna Mielnikiewicz is represented by the MAPS agency.

JUSTYNA MIELNIKIEWICZ - Ukraine, Civilian Resistance (MAPS)
"Russia’s full-scale invasion of Ukraine in February 2022 was a shock to Ukrainians, but not a surprise. They had been at war since 2014, ever since Russian soldiers in green uniforms without insignia annexed Crimea and continued, hiding behind the backs of local separatists in Slovyansk, Krematorsk and then Donetsk. Russia took a territorial bite out of the Donbas and has been festering this regional war ever since, while blaming everything on Ukraine.
The gap between the two countries has been widening ever since the collapse of the Soviet Union. But for the Russian government, Ukrainian statehood is a false creation. In February 2022, it took action to seize what it thinks is its own.
I was in Dnipro when the war began. By the first morning, a group of local volunteers who in 2014 had played a central role in supporting the first months of the aggression, were back in action – setting up a center to help displaced people and volunteer fighters. Resistance continues nationwide, literally, as the war continues. Local citizens confront Russian tanks with their bare hands in places like Melitopol or Kherson."

Partners and sponsors of the exhibition: