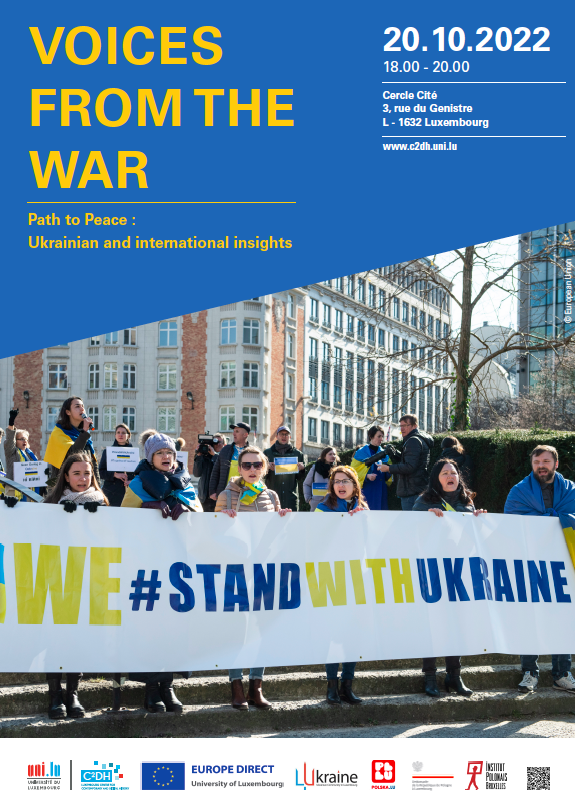 Voices from the War – Path to Peace : Ukrainian and international insights

The military offensive launched by the Russian Federation against Ukraine in the early hours of 24 February 2022 and the ensuing war on Ukrainian territory have resulted in immense human suffering, a humanitarian tragedy and incalculable material damage. The violation of a country’s territorial integrity and sovereignty – an act in clear breach of the United Nations Charter – has shattered the shared framework of values and principles fostered by multilateralism after the Second World War in the hope of achieving world peace, while leading to an unprecedented outpouring of solidarity for Ukraine and the plight of its people from Western democracies and European and international organisations, including NATO, the UN, the European Union and the Council of Europe, and their Member States and private initiatives. As contemporary history is turned on its head, historians, driven by the duty of memory, are stepping up to explain the origins of the conflict, identify the various players, provide an objective analysis of the consequences, record the memories of eyewitnesses and victims – with oral history proving a precious tool –, preserve historical sources and, above all, reflect on the role that intellectual effort can play in paving the way for a return to peace in the new world order taking shape before our eyes.

In this context, Polska.lu, in collaboration with the C²DH, LUkraine and Europe Direct at the University of Luxembourg, are pleased to invite you to a conference entitled “Voices from the War – Path to Peace?  Ukrainian and international insights”, which will take place on

18h-19h: Speaking up - Ukrainian testimonies on the war (presentations).

Why do historians collect new sources?

How do researchers collect new sources?

Mykola Riabchuk is a Ukrainian poet, translator, prose writer and essayist, the president of Ukrainian PEN-center and a senior research fellow at the Institute of Political and Nationalities’ Studies of the Academy of Sciences of Ukraine. In 1970-1973, he studied in the Lviv Polytechnic Institute but was expelled for the unauthorized literary activity, and had to take various odd jobs. In the 1980s, as perestroika advanced, he made his M.A. in the Gorky Literary Institute in Moscow, and took position of an editor in the Kyiv-based journal of international literature "Vsesvit" where he was promoted eventually to the rank of a section editor and the deputy editor-in-chief. His numerous articles in the best Ukrainian and Russian journals brought him a fame of the leading Ukrainian literary critic and publicist. At that time, he received a number of awards for the best articles of a year. In 1997, he co-founded (with the Harvard professor George Grabowicz) the Krytyka monthly and managed it as the executive editor till 2000. Since then, he was increasingly engaged in the academic work as both a lecturer and researcher, defended his Ph.D. in political sciences, and published a number of scholarly works – primarily in Ukrainian but also in Polish, English, Russian.
His many books include a collection of poetry, literary criticism, short stories, scholarly monographs and many collections of essays. He taught at Pen State University in 1994-95, University of Texas at Austin in 1996, and carried out research at George Washington University in 2016. He was a visiting professor at Columbia University in 2006 and University of Alberta in 2007-2008, and recurrently, since 2002 at the University of Warsaw, 2021-2022 at L’Institut d’études avancées de Paris and now in Princeton University.

Suzana Anghel is a Policy Analyst in the European Council Oversight Unit (ECOS) in the European Parliamentary Research Service (EPRS), where her research focuses on the European Council and foreign and security policy. Prior to joining EPRS, she was a project coordinator at the Geneva Centre for the Democratic Control of Armed Forces (DCAF) and a Marie Curie fellow at the University of East Anglia, where her research focused on parliamentary oversight of common security and defence policy. She has a Ph.D. in political science from the University of Geneva.