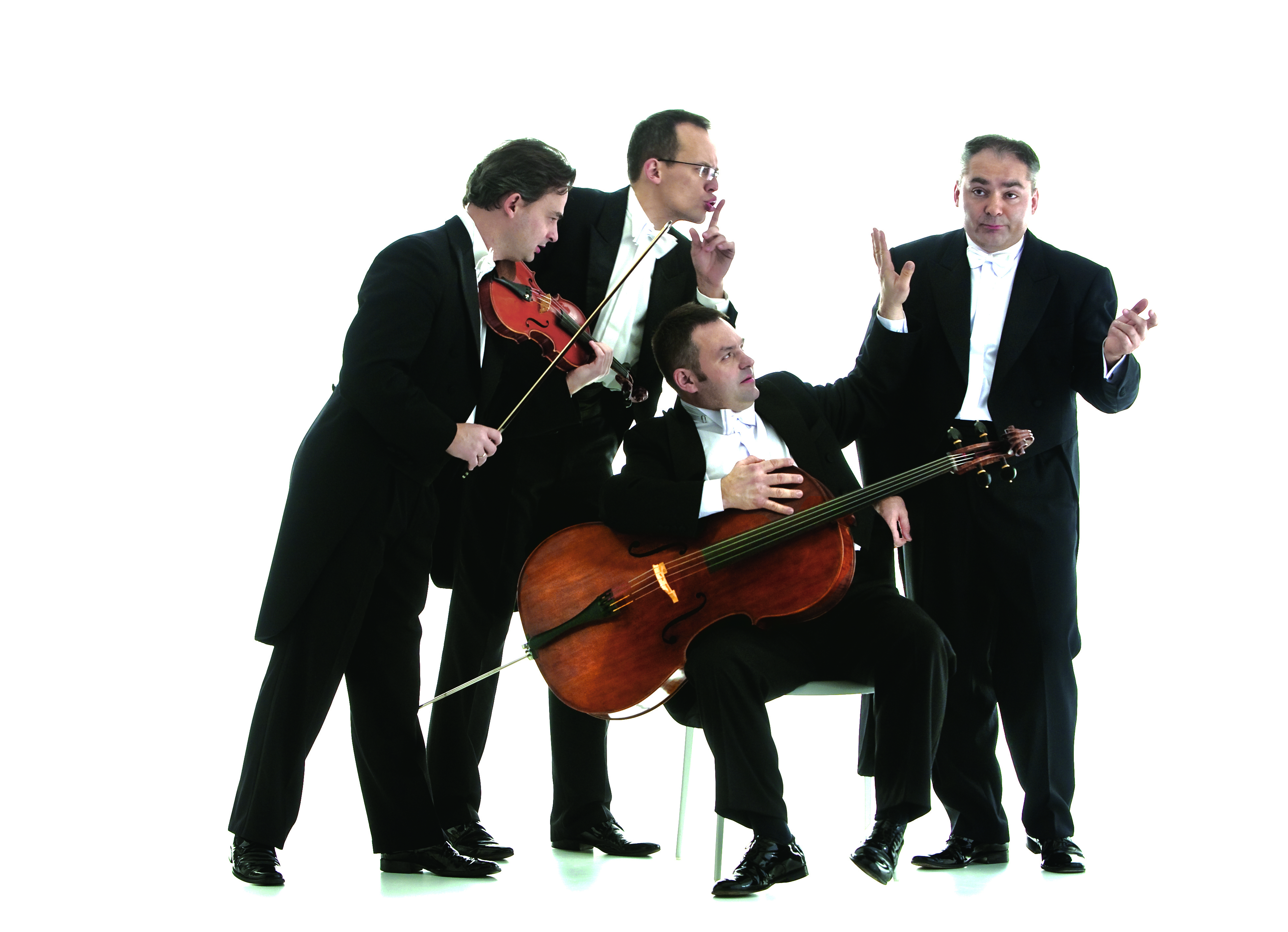 All four gentlemen of the MozART Group are well educated instrumentalists who graduated from prestigious Academies of Music in Warsaw and Łódz, but they decided to play classical music in a humorous way. The MozART Group created a worldwide unique musical cabaret, where the music, not the words are the source of joy and laugh.

Take a classical composition as canvas, analyze its structure and theme, surround it with musical associations, brilliant, outstanding ideas and while listening to the final product the listener is constantly surprised, amazed, laughing and moved to tears.

The musicians of the MozART Group have been playing together since 1995. At the beginning, they presented short musical jokes on Canal Plus Television and gave their first debut in 1997 at the PAKA competition of young Polish cabarets in Krakow. In the same year, they presented their first cabaret program entitled "Mozart's still alive" and since then, they have given concerts in all of Europe, Canada, the U.S.A and Asia. The quartet also performances with colleagues around the world including shows with the mime Irek Krosny or the multitalent Bobby McFerrin.

The MozART Group is a frequent TV guest including international galas and concerts. The quartet received prestigious prizes like the Grand Prix of the XVIII Festival of Satire and Comedy in Lidzbark; "Pingwin z brazu" (the Bronze Penguin) - the prize given by the cabaret community of Zielona Gora, an informal capitol of Polish cabaret and two GOLDEN TROUGHS at the RYJEK Festival in Rybnik/Poland. In July 2010 the MozART Group was awarded a special prize from the Ministry of Culture of the Republic of Poland for outstanding achievements and 15 years on stage. The 31st European Humor Festival GAGY in Slovakia awarded the MozART Group with the 2011 GRAND PRIX. In March 2013 the MozART Group was awarded all three main prizes at the 10th "Festival des Artes Burlesques" in St.Etienne/France: the Grand Prix of the Jury, the Audience Award and the Press Award.

The first show of the Group, in which they took Antonio Vivaldi as their patron, was entitled "The Four Seasons à la MozART Group". Similar subtitle has their CD "Creatures" where each of the seasons begins the same way as Vivaldi's compositions. Later on, however, it runs freely in the direction of various world songs about spring, summer, autumn and winter. This show provides the listener with over 70 minutes of a sophisticated, perfectly arranged, sublime fun!

In 2008 & 2009 two DVDs of the MozART Group were released with great success and got a huge attention in Poland and abroad. The "Best of MozART Group" DVD was released in February 2010. Two further DVDs followed in 2011 and 2012.

2011 marked a very important artistic year for the quartet. Within seven months The MozART Group visited 24 countries, 4 continents, performing more than 150 public and exclusive shows. The quartet made its debuts in the Kingdom of Bahrain, Latvia, Turkey, Mexico, Costa Rica, U.S.A., Estonia, Slovakia, Portugal and France.

In October 2012, the MozART Group performed for the first time in Moscow and performed again at the Svetlanov Hall in December 2013. In 2013 the quartet visited China for the first time performing with great success at the sould out NCPA in Beijing, the SHOAC in Shanghai and six other venues and cities. 2013 ended successfully with eight shows in Germany at the most important venues of the country like the Musikhalle Hamburg, Gasteig Munich, Tonhalle Düsseldorf.

In 2015 the MozART Group celebrated its 20th anniversary with a gala show supported by the BranQ company at the Teatr Polski in Warsaw together with friends and colleagues from Poland and Switzerland. This evening will remain for a long time in our memories. Twenty years on stage is a good reason to show to the audience all the funny and interesting stories which happened during this time! This is why the MozART Group will be presenting "MozART travels!" in the second half of 2016 - a new show, a funny point of view on unexpected situations, regional characteristics, on their and your world.

In 2017 the quartet visited again over 20 countries including France, Switzerland, Czech Republic and Germany. For the first time in history, Just For Laughs - the worlds biggest and most important comedy festival hosted the quartet with a total of twenty shows in Montreal / Canada. The the new DVD has been released in September 2017.

In 2018 the MozART Group will be touring North America, Asia and Europe. From October 2018 until January 2019 the quartet will be performing a total of 65 shows at the Bobino Theatre in the heart of Paris.